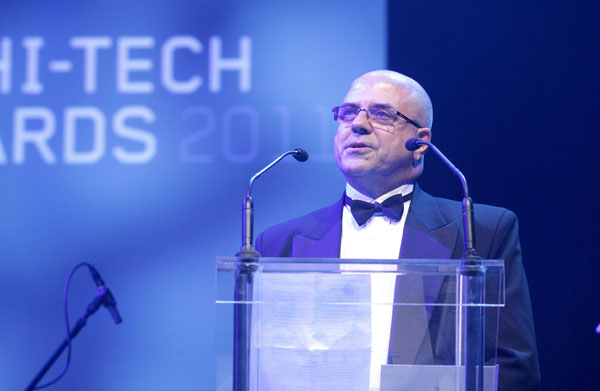 "It is the highest honour our hi-tech industry bestows upon an individual," says NZ Hi-Tech Association chair Wayne Norrie. "You need to have shown inspiration, innovation and leadership over a sustained period of time to be considered. This year over 100 industry leaders were asked to put forward their nominations for the NZX Flying Kiwi award, resulting in some 35 individuals being nominated of whom the three recipients were considered to be most deserving of the title."

In making the announcement, NZX's Damas Potoi said,"All three Flying Kiwis come from very different business backgrounds, yet have keenly demonstrated the curiosity, bravery and innovation that set them apart. New Zealand needs to develop more Flying Kiwis who are prepared to back themselves and take smart risks as it ultimately contributes positively to our economy."

PricewaterhouseCoopers Partner and principal sponsor spokesperson, Scott Kerse says that it is incredibly important for our fledgling hi-tech industry to recognise its pioneers and the successes they are achieving. "We often fail to acknowledge the brilliance and inspiration that sits on our doorstep. We are fortunate to have so many of our Hi-Tech Hall of Fame members actively contributing to business today and being accessible to future generations of Flying Kiwis."

Christchurch based Sir Gil Simpson began work as an 18 year old programmer creating the initial direct credit and direct debit applications that are in common use throughout NZ banking today. In 1978 he developed a new programming language - LINC - providing a simple and cost effective programming environment for applications that ran on large mainframe technologies. LINC was purchased by Burroughs Software (now Unisys) and remains one of New Zealand's most successful software exports.

LINC's commercialization led to the establishment of Aoraki Corporation, now known as Jade Software. In 1992 Sir Gil developed JADE, a new programming paradigm, which is now used by more than 1900 organisations globally as a core information platform. Sir Gil left Jade Software Corporation in 2006 to re-establish Aoraki Corporation Ltd. His latest venture, Jolly Good Software, was formed to focus on how software is sold to business and to create a new channel to market for software supply. He was knighted in 2000 for his service to the computer industry and broader community, holds an honorary doctorate from Canterbury University and was recognized by the NZ Computer Society as having made the most outstanding contribution to computing in New Zealand in the 20th Century.

A fellow Cantabrian, Dennis Chapman is a much loved and respected electronics industry figure who is famous for wearing jandals and short sleeves in any weather for any occasion.

Dennis Chapman began his working life as an apprentice at Tait Electronics aged 17. He quickly qualified as a Bachelor of Engineering and rose to the position of Senior Design Engineer. He left Tait in 1985 to establish Swichtec Power Systems. He sold it in 1998 as a $100 million company employing over 400 staff. He then became involved with a number of other companies including Electec College, Heurisko Ltd, Stratech Ltd and Canterbury TV and was named as Master Entreprenuer of the Year in 2000. In 2005 Dennis Chapman established Enatel Ltd, which specialises in the design and manufacture of standby power solutions for telcommunications, wireless and industrial markets. He remains actively involved in the company today while still finding time for his other interests including motor racing and building a new solar powered home.

Recognised as one of New Zealand's leading Maori innovators, Ian Taylor was popularly known in the 70's and 80's as a television presenter for Play School, Spot On and NZ Funniest Home Videos. But the work that really made this Kiwi fly started in 1990 when he began building two highly successful businesses; Taylormade Productions - a television production company (think Bluebird Chips' skiing penguins) and ARL, Animation Research Ltd.

ARL made yachting a television sport after developing real-time tracking of races using global positioning and real time presentation software. In 1999 Ian merged ARL's 3D graphics into a new company, Virtual Spectator, which bought the America's Cup into households around the world. He is also a share holder and director of Terralink International, a mapping and graphical information company; His work includes some landmark Maori graphic developments, including the award winning Moka Toa series and Whalewatch Kaikoura's groundbreaking World of the Whales animated virtual tour.

Ian was a member of the ICT Task Force and is one of four Trustees on the Secondary Futures Trust, developing a strategy for education in 2020. Born in Kaeo his mother's papkainga he grew up in Kahungunu amongst his father's people and now lives in Dunedin with his family. He is also one of New Zealand hi-tech's most inspiring and hard-working global champions, never missing the opportunity to push home the Kiwi advantage wherever he might be around the world. He makes sure that nobody misses the fact that with a bit of innovative wizardry and technical know-how even a flightless bird, like the kiwi, truly can fly.