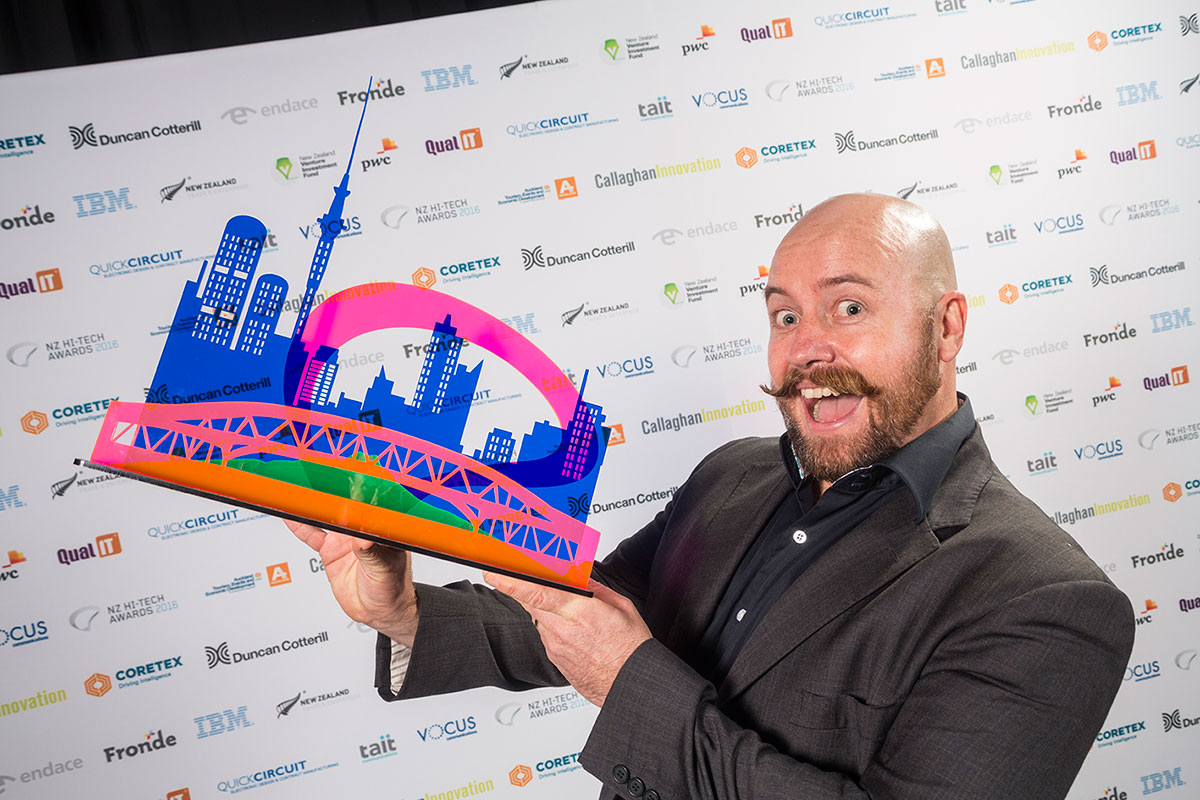 Endace is a world leader in network traffic monitoring technology.  Judges commented that Endace continues to thrive, achieve, and to boldly venture where few New Zealand companies haven't even thought of going.

"The 2005 listing on the London Stock Exchange's AIM was a considerable achievement in itself, and recently strategic sales and acquisition deals have continued to raise the bar. An international exporter since day one, Endace stood out this year with its strong combination of product, market and business leadership" they said.

Xero took out three awards including PR/Marketing Campaign for their strategy around a $15 million share offer to list on the NZX this year; the Endace Young Achiever Award for chief technology officer Craig Walker; and one of two NZX Entrepreneur Awards to chief executive Rod Drury, who takes this title for the second year in a row.

The Hi-Tech Awards were inaugurated 14 years ago to recognise New Zealand technology businesses that are leading their industries, both here and around the world.  The awards also acknowledge the people behind these companies who are working to build businesses around exciting new technologies.

Scott Kerse, who leads the Emerging Businesses team at PricewaterhouseCoopers, said his firm recognised the massive contribution that businesses in the high tech industry were making to New Zealand.

"Sectors such as electronics, software, biotechnology and telecoms are hugely important to this country. At PricewaterhouseCoopers we are investing in these areas "we are dedicating people and resources and working alongside these exciting, innovative companies.  We're very proud to have been involved in celebr/ating the Kiwi success stories at the Hi-Tech Awards this year and we're looking forward to playing a leading role in the industry for many years to come."

Endace provides network monitoring, latency measurement and application solutions to capture, inspect and report on every single data packet regardless of network type or speed.

Bill Gallagher has been chief executive of Gallagher Group since 1975 and chairman of the board since 1985.  Bill has helped transform Gallagher Group into a multi-national manufacturing and marketing company, specialising in animal control and agricultural fencing systems, integrated security systems and specialised plastic products, with a long-term commitment to its partners in more than 100 countries across the globe.  Since being appointed Bill has expanded annual sales from $0.19 million to approx $150 million.  Gallagher Group global headquarters are based in Hamilton.

Eagle Technology Group Limited is one of New Zealand's largest and most successful privately owned information technology companies.  Formed in 1984 by Trevor Eagle, the group gathered a range of specialist and high technology companies. It evolved into a true systems integrator and also established itself as a leader in geographic information systems (GIS). At the time of Trevor's death he was chairman of twelve companies, ten of which come under Eagle Technology Group Limited. For many years he took a leading role in the information technology industry and was former president of the Information Technology Association of New Zealand, and former chairman of the Computer Software Industry Joint Action Group.  Trevor was a committee member of the Technology New Zealand Advisory Board and lobbied vigorously for changes in the tax laws relating to research and development investment.  He is remembered for his boundless energy and enthusiasm, as well as his valuable mentoring and guidance.

Xero is an online accounting system designed for small businesses and their advisors.  Based in Wellington, it was founded in July 2006 by successful technology entrepreneur Rod Drury and small business accountant Hamish Edwards, and launched on the New Zealand Stock Exchange in June this year.  In Febr/uary 2007 Xero implemented a marketing and PR campaign leading up to the release of their share offer document in May.  The campaign aimed to build a wide and credible profile of the company's founders and staff, educate and build relationships with key media and promote the offer by managing interviews and coverage, and succeeded by achieving a $15 million fully subscribed share offer.

Second time winner Divina Paredes has been covering the ICT sector since November 2000.  As the editor of CIO magazine based in Auckland, her distinctive articles focus on the management challenges IT executives face.  Meticulously researched, Divina's interviews provide insights from New Zealand and offshore IT directors, analyst firms and management experts.  She was the winner of the inaugural Fronde Journalist Award in 2006.

Rod Drury is founder and chief executive of Xero, a Software as a Service (SaaS) online accounting solution for small businesses, based in Wellington. Xero listed on the New Zealand Stock Exchange in June 2007 after raising $15 million in a fully subscribed share offer.  Prior to this Rod was founder and chief executive of AfterMail which was acquired by Quest Software in January 2006 and subsequently won Best Exchange Product at TechEd 2006 in Boston.  He was the winner of the NZX Hi-Tech Entrepreneur Award in 2006.

Richard was appointed chief executive of HumanWare in March 2006, and leads a team of 250 globally from Christchurch.  Prior to this Richard spent 14 years working in the US - seven years playing a role in advanced technology development for Apple, and another seven working as a consultant on customer-centred product development for leading technology companies such as Adobe, Boeing, Motorola, Microsoft, Netscape, Palm, Sun and Yahoo.  In 2004 Richard was awarded the World Class New Zealander Award, presented by the government for the expatriate making the most outstanding contribution to New Zealand's economic development.

Fronde Anywhere is a specialist provider of mobile products for the financial services sector, with its head office in Wellington. Released in June 2007, their new security product TwoSecure is a mobile two factor authentication (2FA) solution that generates one time passwords (OTPs) by using an installed and downloaded application that runs on a mobile device.  The pending use of TwoSecure to authenticate point of sale transactions for credit cards represents one of the most significant global case studies for any identity verification product.

HumanWare designs manufactures and sells innovative technology for the blind, visually impaired and learning disabled.  Their products empower customers to live independently and compete effectively in a sighted world.  Over the past five years the company has grown significantly and now employs 250 people globally, has a turnover of $70 million, and has become the market leader with about 60 percent of the blindness market globally.  HumanWare's headquarters are based in Christchurch.

Endace provides network monitoring, latency measurement and application solutions to capture, inspect and report on every single data packet regardless of network type or speed.  In early 2007 Endace secured a contract with a major US telecommunications company worth US$2.2 million.  Endace's corporate headquarters are based in Auckland.