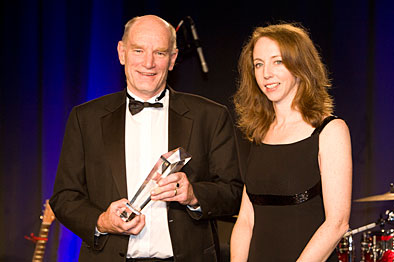 The winners of this year's New Zealand Hi-Tech Awards were announced tonight at a Gala Awards dinner in Auckland. The Awards recognise excellence by New Zealand's producers of high-technology products, services and software solutions.

"The hi-tech sector has once again proved itself one of New Zealand's great success stories. The industry continues to grow at twice the rate of the economy as a whole, and now accounts for more than $2 billion in export sales. We've been through tough economic times in the past year, but the sector is producing more world-beating winners than ever. Entrepreneurship and innovation are critical to global success and we're seeing a new momentum in the companies entering the Awards that gives us every reason to be optimistic about the future of the industry," said Wayne Norrie, Chairman of the NZ Hi-Tech Trust.

The 2010 PricewaterhouseCoopers Company of the Year Award went to Datacom. An IT services firm with more than 3,000 employees across New Zealand, Australia and South East Asia, Datacom was ranked in 2009 in the top 60 companies in New Zealand by revenue, staff numbers and profit.

The Judges described Datacom as "a company which over many years had thought deeply and carefully about its business model and customers. Its size, consistent growth and very significant offshore presence put Datacom in a class of its own. It's the largest New Zealand-owned company in the sector, and a revenue and profit machine." Two new categories this year saw Microsoft take the Recruit IT Employer of Choice Award and Compac Sorting Equipment win the International Business Wales Exporter Award. EROAD won both the HIFX Innovative Service Product Award and the Dell Innovative Hardware Award. The NZX Emerging Company Award was won by TracMap, from Mosgiel, while the Duncan Cotterill Innovative Software Product Award went to Palmerston North-based Unlimited Realities.

Speaking on behalf of the international judges, Andy Lark said the calibre of Awards entries shows why New Zealand deserves its global reputation for technical innovation. "This year's entries raised the bar again. It's really exciting thinking about how these technologies might be developed in the future."