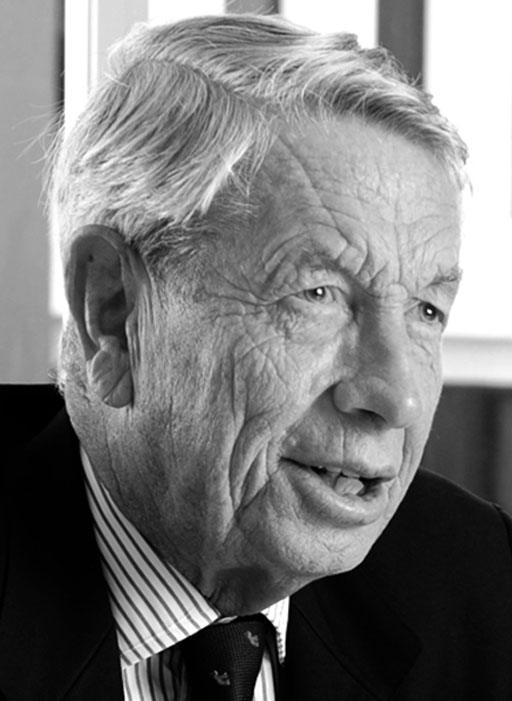 One of New Zealand's true "hi-tech heroes" has been revealed at today's Tait Radio Communications Flying Kiwi Awards. Paul Hargreaves was recognised by his industry peers for not only co-founding one of our largest and most successful technology companies, Datacom, but for decades of service dedicated to advancing technology, science and business in New Zealand.

In front of an audience that included the heads of the many businesses and organisations he has been involved with over the years, Hargreaves revealed how, on returning to the family firm of chartered accountants in Christchurch in the early 1960s, he set about turning his pioneering idea for a computer bureau into a reality. He collaborated with Dr Bernard Battersby, then a partner in Pickles Perkins and Hadlee (a forerunner of KPMG), in the formation of Computer Bureau Ltd (CBL), which was launched in Christchurch in August 1965, opening offices in Wellington (1968), Hamilton (1969) and Auckland (1970).

In 1970 Paul became an executive of the new holding company Datacom Group and, following the retirement of Dr Battersby, he became CEO. Paul Hargreaves then played a major part in Datacom's development until the merger with CCL in 1989/90 and introduction of John Holdsworth to the board. This laid the foundation for the company's growth under the leadership of the late Frank Stephenson. Paul has since continued his close association with Datacom, as a non-executive director, finally retiring from the board three years ago. "Paul is an inspiration. He has made and continues to make an enormous contribution to business, the community and the lives of every day New Zealanders - yet few of us would ever realise it," says NZ Hi-Tech Trust Chair, Wayne Norrie. "Having started life as a chartered accountant he saw possibilities in the infancy of computing that few others around the globe, yet alone in New Zealand, were able to grasp. He not only saw the opportunity but seized it and pulled together a team of skilled individuals to create a business that has changed the face of how hundreds of New Zealand businesses operated; giving them a competitive advantage by making leading-edge technology accessible and affordable." Frank Owen, Managing Director of Tait Radio Communications said he was delighted that this year's award ceremony was held in Christchurch virtually in viewing distance of where Paul Hargreaves started what was to become Datacom.

"The Flying Kiwi Awards are all about ensuring that our unsung heroes are recognised," he says. "It is really important that we continue to tap into the knowledge and experience that the living members of the Hi-Tech Hall of Fame are able to share with those who are just starting the journey. While Datacom is pretty much a household name in New Zealand business circles, few people within the industry know much about the men who founded it and the story of how Datacom was built. We are delighted that Paul Hargreaves has been named as this year's Flying Kiwi recipient and that this story will rightfully take its place as part of New Zealand history."

Paul Hargreaves is also well known as a founding Director and past CEO of the National Institute of Water and Atmosphere (NIWA) and as Chair for Antarctica New Zealand. His love of the Antarctic started as a young 17-year-old cadet when he was chosen to accompany Sir Edmund Hillary's 1957 tractor expedition. He has since returned to the Antarctic several times, twice with Sir Ed, including his last trip to celebrate the 50th anniversary of Scott Base. In 2008 a mountain peak in the Ross Sea region of Antarctica was named Hargreaves Peak in his honour. A well respected director, Paul has also served on the boards of other technology companies such as Gallagher Group and Software of Excellence. He is a past president of the NZ Institute of Directors (2007-2009) and is currently sharing his knowledge and experience as chairman of the board for software start-up AllTeams Ltd.

Paul Hargreave's love of the technology sector has also seen him actively involved as the Chair of the government-sponsored NZ HiGrowth Project Trust (2004-2008). He is also extensively involved in community organisations such as Shine, the Laura Fergusson Trust in Christchurch and the GI Cancer Institute, and was recognised as an Officer of the Order of Merit in 2007 for his services to business and the community.