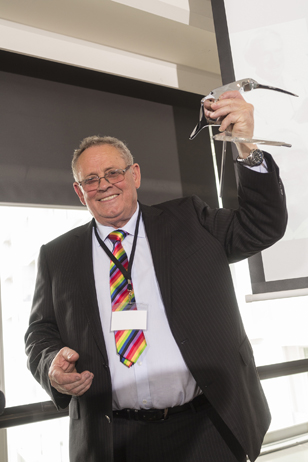 The newest inductee to New Zealand’s Hi-Tech Hall of Fame is Bill Buckley, founder and President of Buckley Systems Ltd. Bill was announced as the 2013 Flying Kiwi at a celebratory lunch in Auckland today, attended by a fellow Flying Kiwis and members of the New Zealand Hi-Tech industry.

The Flying Kiwi award recognises Bill’s lifetime of achievement in the technology industry in engineering, business and export and the founder of Buckley Systems Limited (BSL).

Speaking at the event, NZ Hi-Tech Trust chairman, Wayne Norrie said “Bill Buckley’s achievements, like those of all our Flying Kiwis, are nothing short of incredible. His philosophy on business and life is truly one to admire. Bill says:”

“It’s no good doing what anyone can do. You have to go after the stuff that is too complicated for the average engineer so you can be Johnny on the spot when the demand hits.”

“That’s a philosophy he has followed, and continues to follow, with great passion, commitment and drive. It’s led him to create a company at the very forefront of technology innovation globally. Today, BSL is building products that are powering the innovations of tomorrow in areas such as computing and healthcare from right here in New Zealand.”

“Like all our Flying Kiwis, Bill is humble, and unassuming, and outside of people in this industry, few New Zealanders would be aware of his fantastic achievements. Which is why it’s so important we celebrate our Flying Kiwis and tell their stories more widely.”

From an early age, Bill Buckley was driven by a fascination with technology and a desire to build things. He took an early interest in nuclear physics, and his curiosity and passion drove him to establish his first company in 1978.

In 1986, Bill setup Buckley Systems Ltd with the intention of pursuing a global market opportunity in the supply of precision electromagnets.  Today the company employs more than 300 people and is a global technology leader exporting its products to customers around the world from its headquarters in Auckland, New Zealand.

During the course of his career to date, Bill Buckley has won many awards including:

Bill’s passion drives both his work and private life. Outside of work he is well known in the motor-racing community where he has been an enthusiastic supporter of the Western Springs Speedway, and can often be found grooming the track in preparation for racing.